Home About Us Diocese 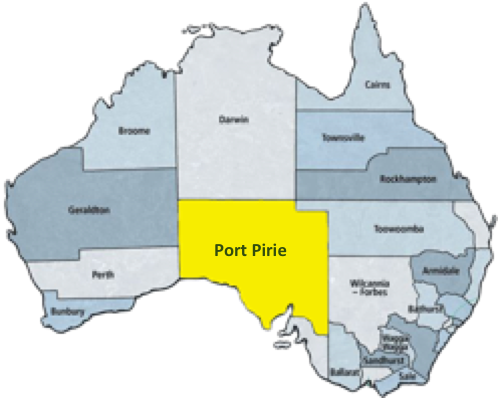 We are a diocese of forty-seven churches and fourteen schools, and little faith communities cluster around the churches, and the schools are popular and themselves are communities of faith and learning, and the brightness of youth with its promise of the future.

Ours is a poor diocese, and always has been, and reflects the life of our people who have had to struggle hard to persevere, and who therefore are a people of endurance. In such circumstances people distil their values, and these are seen to be standards such as loyalty, love of family, commitment to each other, the help of a neighbour in time of need, as can be seen in times of bushfire or flood or drought relief.

Our Indigenous people have a spirituality of the land, and we, their European brothers and sisters, should endeavour to learn from that. How was God the Creator Father interacting with our first Australians for forty thousand years before the first white persons arrived? In other parts of the world, the isolation and the desert is a place of encounter between God and man. There is a spirituality of the earth, and lessons about God in the vastness and silence of our land, and in its beauty, the beauty which extends from the awesome might of Uluru to the rugged ancient splendour of the Flinders Ranges. Ours is a place of silence, vastness, beauty and endurance.

The Diocese of Port Pirie is almost one million square kilometres, and reaches from just above Clare to include the great spiritual heartland of Australia at Uluru, and the diocese stretches to touch the other states of Western Australia, Queensland, New South Wales and Victoria. We are situated therefore in a most central part of our country, and in many ways we are evocative of the Outback.

Our cattle stations are vast, as is our rocket range, and as are the Aboriginal lands of the north-west. We include the second largest uranium mine in the world, and mining is beginning to have an economic impact to help the life of our towns. Our regions include not just the Outback of the north, but the fishing and tourist areas of the west coast, with its whale watching and fishing, the towns and vines and orchards of the Riverland in the east, the little towns and their prosperous yields of grain in the mid-north, the more challenged areas for graziers and pastoralists in the west as one goes beyond Ceduna, and the industrial life around the towns of the gulf, but including restful fishing villages and towns, home of the great white pointer. We have settlements where life has been hard such as at Coober Pedy and Andamooka, where the temperature has driven the people to live and worship underground, as in the Coober Pedy Church.

All the icons of Australia live within our boundaries, from exotic fauna like the birds and reptiles, the kangaroos and emus in their great numbers, and also the exotic character of the introduced species, from dingoes to camels to donkeys to wild horses.

Our rich history is punctuated with the work of the pioneers and how the Sisters of Saint Joseph forged their charism here, with Saint Mary of the Cross founding some twenty-two little schools in our towns.

She travelled our paths and roads, got hot and dusty in our land, and shows that the holiness of God can radiate through any person if they are open to receive Him. 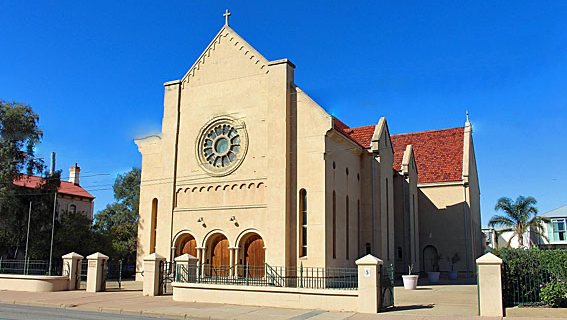 The diocesan heraldic achievement, or as it is more commonly known, the “Coat of Arms” of the diocese, is composed of a shield, with its charges (symbols) and the external ornaments.

The shield, which is the central and most important feature of any heraldic device, is described (blazoned) in archaic, 12th century terminology. The full achievement of the arms of the Catholic Diocese of Port Pirie are displayed with the Mitre, the Crosier and the Lappets surmounting a shield of the arms of the diocese.

There are three basic elements in our Arms:

“Blue field separated by lines in green, gold with wheat in white, orange, red and brown separated with a blue wavy line. Top right a capital M in white, top left the Cross of Saint Mary Mackillop in white indented.”

The diocesan Coat of Arms was designed principally by the diocesan media and communications committee and was born out of the ecclesiastical heraldic requirements for a Roman Catholic Diocese. 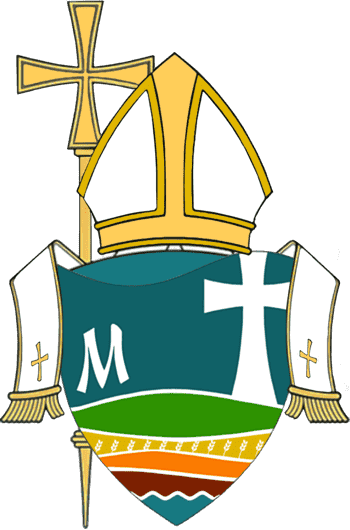 Patrons of our Diocese

PATRON is a saint who stands at the spiritual foundation of a community, church or diocese.

It is the practice that every diocese has Mary, the Mother of God, as a Patron of the diocese under one or other of her titles. Blessed Virgin Mary under the title of the Immaculate Conception was proclaimed Patron of our diocese when it was established in 1887.

The Feast is the 8th December. 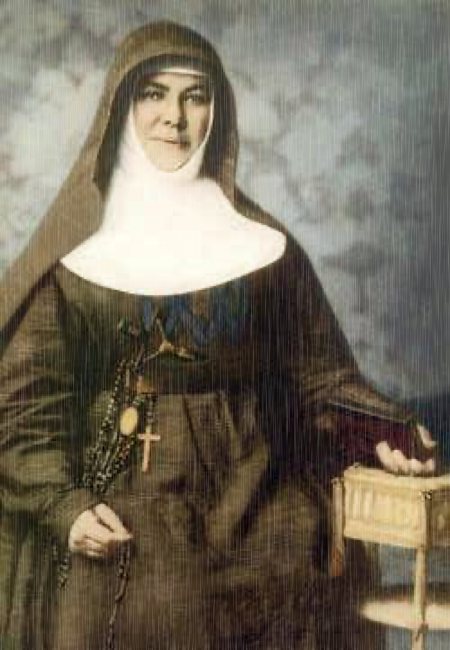 It is also common practice for a diocese to have one or more Saints as Patrons in addition to Our Lady. It seems appropriate to me and those I have consulted that Saint Mary of the Cross MacKillop be proclaimed as a Patron Saint for our diocese because of the example of her holiness and her intense involvement with the Catholic people and others in the early days of the colony and our diocese.

Consider our rich association with the Saint. The oldest Josephite school in Australia is at Wallaroo, founded by Mother Mary in 1869 and conducted continuously since then. Mary founded a school at Kadina in the same year, but it was merged with Wallaroo at end of 1974. Over the next ten years Mary founded a further fourteen schools at Burra, Moonta, Port Augusta, Georgetown, Blinman, Port Lincoln, Laura, Appila, Caltowie, Yackamoorundi, Saltia, Pekina, Orroroo and Jamestown, with seven of these being founded in 1877 alone. By the time of Mary’s death in 1909, some twenty-two Josephite foundations had been made in this diocese, most founded directly by Mother Mary herself. To read the list of Josephite foundations is to read the progress of the European pioneers of the colony. Some of the towns where Mary founded schools have now disappeared, such as Willochra and Saltia and in other places like Blinman, Appila and Yacka, the size and activity of the town has altered considerably. After Mary’s death, the Josephite Sisters have founded a further sixteen works in our diocese, including the Motor Missions established in Waikerie, Peterborough, Port Augusta and Georgetown.

The Josephite charism of two or three women living the religious life in a simple dwelling in what in its beginnings was a shanty town was forged in this diocese. The Sisters moving out to remote areas to care for children and families who otherwise would have had no opportunity for schooling and the deepening of the faith became the image of the Josephites in our diocese. How scattered they were in their life of service for the people; the Sisters at Blinman would have had the Mass and a visit from the priest no more than three or four times a year.

It is not for her works, however, that we consider Mary of the Cross so appropriate as our Patron Saint. It is for the life of holiness that she displayed. She was a Saint who traversed our roads and tracks, got hot and dusty and tired as she went through our little towns, visiting the schools and the families of the young women who had joined her as Sisters. We have her letters written from many of our towns where she stayed overnight during her visitations. Her life reminds us that holiness is not distant from our ordinary lives, that a Saint is not one who has to live outside our shores, that the love of God can transform anyone of us into a person of radiant sanctity, that the Gospel message to serve Christ in the smallest of our brothers and sisters was able to be exercised very much here in our land and our places by a woman now proclaimed to be a Saint of the Universal Church, a model for all Christians.

Having now received the appropriate canonical advice as Ordinary of the diocese, and having received the unanimous endorsement for this proposal at a gathering of all the priests of the diocese, and also having received the unanimous endorsement for such a move from the newly formed Diocesan Pastoral Council which represents all areas of the diocese, it is with great joy and delight in the Lord that I make the proclamation of Saint Mary of the Cross MacKillop as Patron Saint of the Diocese of Port Pirie. Of all dioceses, ours is the one who knew her best, that welcomed her when sections of the Church were rejecting her, and we have seen so many young women of the diocese answer the call to follow Christ in the religious life framed by her.

This proclamation is being made on the Feast of Saint Joseph, the day on which in 1866 the young Mary MacKillop began to wear a form of dress to mark her as a religious person, and it is the date which she herself assessed to be the foundation date of her Congregation. In 1872 on this date, Mary and a number of her Sisters who had been disbanded as a result of the excommunication decree were clothed again in the religious Habit in Saint Ignatius’ Church in Norwood. With great faith and trust in God, and with great love for our Mary of the Cross, we commend the needs of the people of our diocese to the intercession of Saint Mary of the Cross MacKillop, our Patron.